For the most part, I was a conformist as a kid. I never wanted to rock the boat and I always wanted to do the right thing and please others. There was that brief moment of stealing I went through in the first grade (sorry Laura McDonald), but after that, I was pretty much back to people pleasing and rule following.

As time went on, I began to see life a little differently. I started to experiment with drugs and alcohol (there goes my political career) mostly because my friends were all doing it. But I always felt like a late bloomer in that department because it wasn’t until college that I really cut loose. I got my first boyfriend at age 19 (love ya Brent) and enjoyed every minute of my college experience with my friends. I changed my major from biology to Women’s Studies as soon as I got wind of how much math was involved in becoming an oceanographer.

I began questioning the “dominant paradigm” and I was drawn to people who enjoyed discussing the things that I had been raised to think were too taboo to talk about. I began to feel it was important to help others and I sought work in the non-profit sector to really help the disenfranchised.

So hear I sit, older, wiser, and sober to a fault. I can’t believe what has happened over the past seventeen years. Whereas the taboo topics of all those years ago dealt with heady topics like sexual orientation, women’s rights, and sex, today they pretty much only deal with things that people with children don’t want to talk about. Like head lice.

While my compatriots were off to far away places like Italy, Disneyland, and grandma’s house, I started out our three-week fall break inspecting my child’s head only to see what appeared to be lice eggs, or nits, as they call them. It was my worst fear come true (Okay, I exaggerate! Not really worst fear, but on the list of fears for sure…somewhere towards the bottom). My kid with the thickest head of hair in the family was invested. Ugh! I felt panic-stricken.

You are itchy now aren’t you?

All immediate plans for camp were out and I began to rid our home of every stuffy and furry pillow, and began my fall spring-cleaning session. I convinced my husband to help me out by allowing me to get him from work so he could wait in the car with the kids so I didn’t have to take four kids into the store while I stocked up with lice killing shampoos, new brushes, and shower caps.

My washing machine kicked into high gear and everything got blasted with hot water followed by a shrink-producing heat from the dryer. It was not how I pictured our fall break starting out….at all.

And herein lies the taboo…it’s not like I wanted to publically declare my latest child’s affliction on Facebook. Would anyone ever come to my house again? I did such a good job last year fighting the lice. Flyer after flyer would come home in my daughter’s school cubby and I immediately went to work applying lice deterring agents such as rosemary, peppermint oil, and eucalyptus. My kids were going to school smelling like aromatherapy-gone-horribly-wrong little hippies. I busted out my tie-dye skirt.

But then this year when the flyer came home, I got lazy.

Thankfully, worst case scenario number #423 turned out to be not so bad. When I got the courage to mention it to a friend, she admitted that her child had lice last year too. Myth put to rest, little boys get lice too. But seriously if I had boys, I would have just busted out the razor…buzz cuts for everyone!

The good news was that I think I caught it early, after washing her hair with this terrible smelling shampoo, it seemed like there were only a few nits to comb out. So few, that I have to admit that I questioned whether or not it wasn’t really lice after all. Perhaps I treated every family member on account of a few rogue hair fuzzies. That’s me in a nutshell.

So my kids are lice free, our home is clean, and we are ready for school to start back up on Monday. I bought some lice prevention shampoo and spray. Me thinks we dodged a bullet this time in the grand scheme of lice infestations. I am not going to let my guard down again anytime soon.

My how the tides have changed. Lice, it happens. Next….. 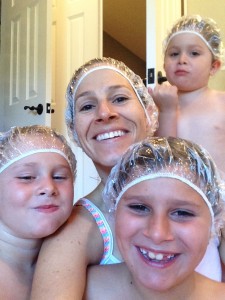