I learned something about myself this past weekend. I learned that I am good in an emergency situation. It isn’t something that I wanted to know, for knowing such a thing would require one to go through and actual emergency. But I guess it was bound to happen with four kids.

If you had asked me the odds have always been stacked against Georgia (and I still haven’t ruled her out). With her larger than life energy, she has always seemed accident prone to me. Since she was very little she has fallen down about a million times. She routinely gets up and exuberantly shouts, “I’m okay!”.

I think I am still in shock because up until last Sunday I didn’t expect that the one needing the emergency care would be my husband.

Notes to self: First, next time a remote control helicopter gets stuck in a tree….leave it there. Second, don’t allow your husband to climb a ladder and pole vault a 15-foot-long solid wood dowel into the air to get said helicopter down. The end result will not be good, even though immediately prior to the harmful blow, there was that one throw that almost got it down (Doh! So close!).

As we stood there under that giant oak, we tried to position ourselves directly under the tree so that we could aim the pole and dislodge that helicopter from the tree. Balancing on a hillside proved to be difficult as it required me to use my body weight to keep the ladder from toppling over as Brent climbed it with the gigantic rod in hand.

After his first attempt, I had to duck, I turned my body away with one hand firmly on the ladder to keep him from falling, and the other arm fiercely guarding my head from certain doom. The second attempt nearly got the helicopter out of the tree and Brent caught the dowel with one hand out stretched. We were excited by the fact the helicopter nearly came out of the tree. Despite our near misses (and nearly missing our heads), we pressed on with the hope that this next throw would be the one that dislodged the helicopter.

But alas, with the final throw we weren’t so lucky. With a sound that only cartoons could mimic (“Glock!”) Brent shouted, “My tooth” and went diving towards the ground. The pole had come back and hit him square in the mouth. Blood started pouring out of his mouth.

He was lucky that he saw where the tooth landed amidst the tall grass at the base of that tree. With his lost tooth clenched tightly in his fist and his other hand covering his mouth, Brent was frozen. He looked at me with a look that said “Oh, crap! Now what?”. I ripped off my shirt (thank God it was only from Target and thank God I was wearing a bra) and held it to his mouth while getting him to the car.

Luckily for us, my sister had been visiting for lunch and was with the kids while Brent and I had gone to the park to get the copter. When she saw me walk into the house without a shirt, I calmly told her what had happened (in Spanish so as to not alarm the kids). I grabbed a shirt, his ID and insurance card, and quickly left for the hospital.

On the way, we called our local dentist who told us how critical it was to get a tooth back into the mouth within 30 minutes of losing it. But we were going to the ER so we knew that time would not be on Brent’s side. He suggested that putting the tooth in milk could help preserve it until he was able to get it back in his mouth, and since we were already en route to the hospital without milk (or at least milk that wasn’t rotting in a sippy cup in the van someplace), Brent was advised to keep the lost tooth in his mouth with his own saliva.

After getting into the ER, we got in relatively quickly to see an ER doctor. It was determined that Brent had fractured the bone above his mouth making it impossible for the ER doctor to get the tooth back in. At once, he called every oral surgeon in Sonoma County and was able to get us into see one in Santa Rosa.

Dr. Vincente Chavez met us on a Sunday within a half an hour of receiving a phone call from the ER doctor. It wasn’t a fun visit to an oral surgeon but within a reasonable amount of time, Brent was sedated and his teeth properly put back into his mouth. He now has the braces our seven-year-old has always wanted.

It is the hope that Brent’s tooth, after a long four hours out of his mouth, will recognize it’s former home and not die. If that doesn’t happen, he’ll have to get an implant, which the ER receptionist told me, after flashing a pearly white smile, can be even better than the real thing. So for now, we wait and Brent heals.

The night that we returned from the oral surgeon’s office there was a fierce wind blowing in west Petaluma. I went to the park the next day to see if the helicopter had gotten blown down. Nope. It’s still up there like the stubborn piece of plastic it was born to be.

I think my modest husband is a little embarrassed by what happened to him. To guys, maybe getting your teeth knocked out is only hardcore when you do it mountain biking a treacherous ravine or getting in a bar fight. For me, I don’t care how it happened, I just don’t want to see it happen again. What’s badass about it is that he was at work the next day meeting clients and making light of a situation that was pretty intense in the moment. What a guy!

I told my friend Megan about what happened to Brent and apparently her husband has lost four helicopters while she’s known him. I swear those things are devil toys.

The moral of this story is this: next time Costco has remote control helicopters for only $60, just say “No!”…opt for the remote control car instead. 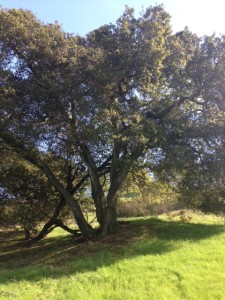