From Disney With Love

I’ll admit it; I’m a wannabe. I want to be one of those parents who travels with their kids everywhere. I want to be that parent that takes their kids with them to places near and far, across mountains, and oceans. I want to have many stamps in my passport and I’ve fantasized having children with stamps in their passports too.

I have friends like that, well travelled with well-travelled children. They don’t feel like having kids is a reason not to travel. They haven’t “settled down” just because they have kids, they continue to see the world making the kinds of modifications necessary when travelling with young children. They might choose destinations safer to go to with unvaccinated young children or abandon the rugged backpacking excursion until the kids are a little older, but they still travel.

My husband and I just got home from a week “vacation” to Disneyland. As a wannabe, when we initially started discussing where we would take our family vacation, I went to bat for a trip to Hawaii. How you get from Hawaii to Disneyland is an example of something getting lost in translation, but whatever, it was better than not taking a vacation at all. As a former die-hard Winnie the Pooh fan, I figured I would have a great time.

Ultimately, I think I lost my argument on two counts. One, it is expensive for a family of six to travel to Hawaii and two, my husband is more conservative in his thinking about travelling with children. I know for a fact there are places he dreams of taking the kids, like Israel, and Europe, but I’m pretty sure my husband dreams of taking his kids there when they are older than 6, 4, 2, and 8-months. I think he also had a really hard time envisioning relaxing on the beaches of Maui while changing diapers. So, we set our sites on Disneyland and decided to use it as an opportunity to forego the usual birthday hoop-la and celebrate Olivia’s 6th birthday there.

A week before our trip, Brent and I got real with each other. “What are we thinking taking four kids alone to Disneyland without any help?” we wondered. It’s hard enough manning the zone at home let alone a theme park where little kids have been known to explode. We had some extra savings so in lieu of upgrading to the Grand California Hotel; we enlisted one of our beloved babysitters and her husband to come along.

We packed our mini-van full of snacks, luggage, and with our double-Bob secured on top, took to I-5. A few days later, our newly married, twenty-somethings, would fly down to meet us when we checked in.

In a nutshell, I learned a lot about myself on this trip and about going to Disneyland with young children. Here are my top 10 take-aways for 2012:

Now that I’m home, I’ve had a lot of time to reflect on what worked and what didn’t. It was a privilege to be able to go anywhere with my family. On the last day in Disney, as I crossed the street to my hotel, there was a pregnant woman panhandling for money for her and her baby. It really hit home to me then despite the tantrums, the heat, the craziness of taking four little ones to the “happiest place on earth” that we are some of the lucky ones. I will never forget Georgia telling me how “terrible” the Haunted Mansion was and despite her terrified little face, her thrill at riding on Splash Mountain with us. I have built some lasting memories with my children and husband. It wasn’t a seamless perfect family vacation but then again, there’s always Maui in 2013. 🙂 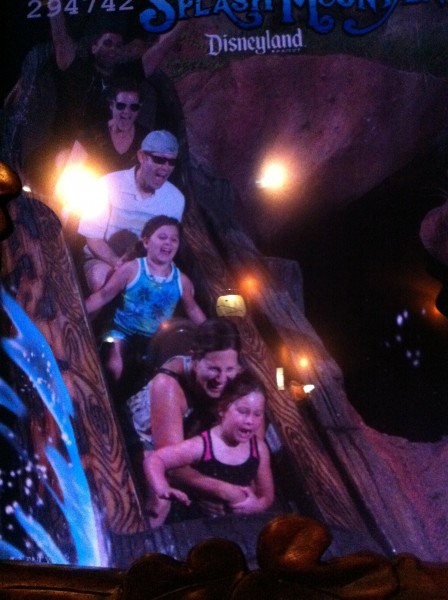