We are all recovered from my sister’s wedding weekend. I am happy to report that the Blaustein girls were on their best behavior. They were dressed adorably; they wore beautiful vintage-blue dresses and had their hair pulled back with halos of yellow roses adorning their heads. Georgia was a superb ring bearer and could have handled the actual rings had she been entrusted with the “real deal”. Olivia was shy dispersing the flowers down the isle but fortunately we all made it down. The children were no more disruptive during the exchanging of the vows than my Tía Carmen taking photos from the bushes. They did great during dinner and we were so proud of how well behaved they were. After dinner, the girls enjoyed the dancing with us and we all had a great time together as a family.

Considering that young children at weddings are risky, there were really only two down sides. One was getting chastised by my sister’s new mother-in-law for my kids being overly excited when their Papa (my father) got up to give a speech. She hissed, “Oh, come on Veronica! Do something!” Meanwhile my father was happy to have his grandchildren up there with him.  No one else seemed to take issue with it but her. I got up anyway, got them seated, and occupied them long enough to get them through his speech quietly so she could enjoy it. She apologized to me later and I tried hard to forgive her.

The other issue was my dress. It was pretty form fitting especially around my middle. I felt as though my Spanx failed me that night because after dinner, a friend at the wedding came up to me, patted my tummy, and asked how I was feeling.

It has been a lifelong dream of mine to have a big family. When we were blessed with Olivia, I was overjoyed. After realizing a baby and all of her stuff didn’t fit as easily in our Honda as we would have hoped, we bought a mini-van. I remember telling my mom that I was “going to fill it with babies”.

Raquel is just 14 months but we are constantly fielding the question from people on whether or not we are done having children. Brent always says, “Yes, we’re done!” before I even get a chance to open my mouth. I like to answer, “I would love to have another baby but Brent is pretty sure he is done”. But if he is standing nearby when I am being asked this question he stands there shaking his head silently as if to say “No, we’re done”.

It was interesting to me that Brent wasn’t running to get a vasectomy after Raquel was born. I’m not sure if it was because he had told me he was going to keep an open mind to my desire to have another child one day or if he was traumatized by a story of our friend’s husband’s vasectomy. Apparently, our friend’s husband wasn’t fully anesthetized before the doctor made the “snip”. She said she could hear him screaming down the hallway.

So, there I stood, at my sister’s wedding in my teal Tracy Reese dress, thinking “Darn it! I should have worn the other dress I was debating about wearing”, I was embarrassed, and at the same time I felt relieved that my friend hadn’t been mistaken like the million other times people wrongfully assumed I was expecting. So I let the cat out of the bag that night by simply asking her “Who told you?”

We have been sitting on the news for a few weeks now.  We hadn’t wanted to talk about our pregnancy and steal any of my sister’s wedding thunder. I think we have also been in shock. I was also embarrassed to admit that just because we struggled with infertility for years before Olivia, and now three children later, I could still think that I wasn’t capable of easily getting pregnant. I had just quit nursing Raquel and was carrying the new prescription in my purse for a stronger birth control pill. I had just gotten another prescription from my dermatologist so I finally went to the pharmacy with my two scripts. While there I bought a pregnancy test “just in case” before I started taking those two medications.

When the positive sign came over that first pregnancy test I was floored. “Oh, crap!” was my first thought, closely followed by “how the heck am I going to tell Brent?”, and then rapidly followed by feelings of gratitude. Was my wish of having another child coming true? But so soon?

Brent was wonderful when I told him what I had learned. He called it a “blessing” despite the fact that he obviously wasn’t expecting or wanting to hear that I was pregnant. At the moment, I think he feels like I do, nervous about providing for another child but excited and hopeful at the same time. We have felt extremely anxious about telling our friends, family, and even my readers. We worried out loud, “What are they going to think?” We didn’t want to be judged or criticized. We aren’t stupid and we realize that we have enough on our plates with our three girls as it is. Ultimately it is our life and I don’t want to live worried or caught up in caring too much what other people think of me. Plus, I wanted to tell because I can use all of the good thoughts and prayers I can get.

Although we are still early in this pregnancy, I am taking things one day at a time right now. This week, I have been launched into full-fledged morning-noon-and-night-sickness. It has been hard to smile and pretend that everything is “business as usual” at the Blaustein residence. I am scared but excited about having a fourth child.  I am in survival mode and my only tactic is staying in the day and riding these waves of nausea. I want to enjoy Olivia, Georgia, and Rocky while expecting my fourth.

Just for the record, now, if anybody asks us, I can pretty much guarantee you will hear in unison this time, “Yes, yes, we are done”. 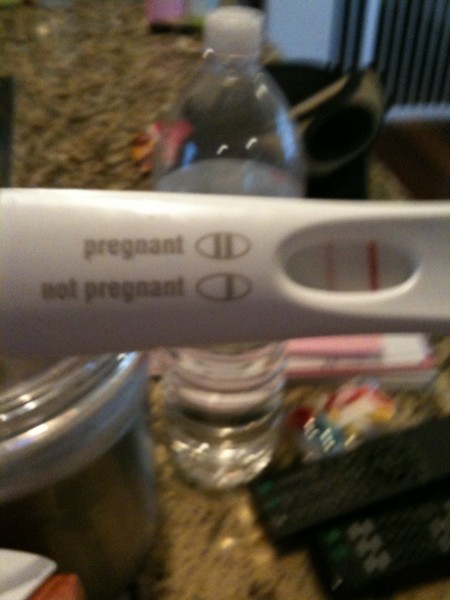