“Forgive me father for I have sinned, it has been two weeks since my last blog, but I can explain….”

Finally a summer is here that I could say feels like summer. My oldest is out on summer break from school and for the first time I don’t feel like shooting myself. My little ones and I are enjoying our new playroom, trampoline, and weekly swim lessons at the gym. The sun has started to brown my skin and we all have funky tan lines on our bodies from straps and such.

The fourth of July came and we had a blast making smores (or schmores as Brent hilariously calls them) and watching the fireworks from our friend’s front lawn. The kids got to stay up until past ten o’clock and the next day Rocky slept in until 9 am.

It was all going too well….

One day I noticed some water spots on the carpet, it was in the same place that weeks ago I had noticed water but brushed it off as “no big deal” because I assumed the girls had just spilled something. But this time I knelt down to investigate further. The carpet was completely saturated. Oh, no! The laundry room! I immediately called our home warranty providers and had them dispatch a plumber right away. We stopped using our laundry machine and waited patiently for the diagnosis.

It seems as though a leaky valve in our second most used appliance (second only to the dishwasher) was causing the water to seep up into the adjacent living room floor. I knew that we were going to have to somehow get the water up and out but didn’t know that it was going to be such a project. After first getting a number to a company that wanted to do lots of over the top testing, sending samples to labs before drying, etc., I obtained an appointment with Servpro, who came out to evaluate the damage.

During my meeting with the Servpro rep, scary words got thrown out at me like “Category Three” water damage. The next thing I knew, guys in white Hazmat suits were demolishing my living room and creating a large plastic zone that served as a drying room for the walls and floors that had been saturated from the leak. I guess it was more serious than I thought.

Luckily we were able to save the television from having to be shut down and the Internet box from being disconnected. I didn’t think we could live without television for over a week while the demo and repairs were being done to the house. As it turns out it doesn’t matter we have our television because with the sound of the drying fans, it cannot be turned up loud enough to be heard. It is like we are living in a giant wind tunnel. We can barely hear each other talk when we are sitting right next to one another on the couch.  “What?!” is all we keep saying to one another.

Oh, such an adventure indeed. Thankfully, we have insurance and although we would rather spend the deductible money on something fun, we will get it fixed and begin again.

I’m feeling pretty grateful for my attitude about this whole thing. I’m determined to let nothing ruin my summer. In fact, I couldn’t be enjoying it more. Well, that’s a bold face lie. I really wouldn’t mind enjoying my children in the warm sands of Maui or any place without wind for that matter. 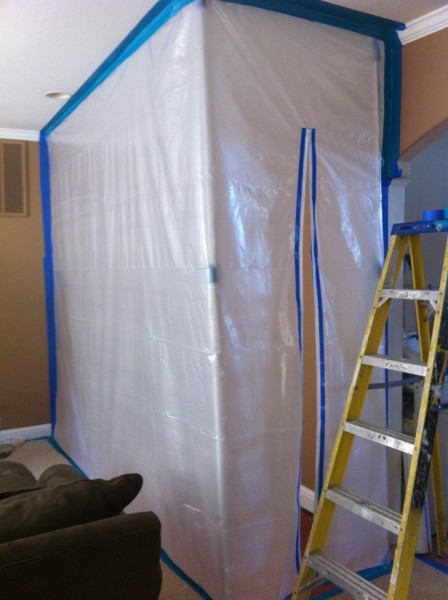