When Olivia told me that her tooth felt funny, it didn’t exactly dawn on me at the time why that would be. “Have they been brushing enough?” I wondered for a moment and then I forgot about it and moved on with my next task. Later on that day her tooth was wiggling.

“Mommy, look at my tooth!” she exclaimed with sheer joy. She started jumping up and down and yelling, “Woo-Hoo!”. Then she wanted to know if she was going to camp the next day so she could show her friends.

After seeing Olivia’s loose tooth, I immediately texted Brent to tell him to be prepared. The tooth fairy would be coming to our house very soon.

Even though I knew that a loose tooth usually equals said tooth falling out, I wasn’t prepared for the next part. And boy, once that tooth comes out, parents you have got to be ready! Do you know what your tooth fairy strategy is going to be? I immediately consulted the oracle (Facebook friends) for advice on what the going rate was for a tooth. What I learned was amazing to me.

To my surprise, I found out from parents and teachers that teeth go anywhere from one to twenty dollars a pop. “$20 Bucks!” I exclaimed out loud. What? For a first tooth?! Way to go parent who did that, and by the way, thanks a lot.

I can just see it now, Olivia in class bragging about her very special $1 that the tooth fairy brought her to the kid that got a crisp $20 bill. When she gets home she will ask,” Why did the tooth fairy give so-and-so $20 and only give me $1?” Thanks a lot tooth fairy, thanks a lot. How do I answer that one? “The tooth fairy must like him better?” Or “His tooth was bigger?” Or how about, “Our tooth fairy is cheap”

I also learned that often times the tooth fairy leaves fairy dust behind on or around the child’s pillow. Knowing that fairy dust (a.k.a glitter) takes forever to get out of hair, clothes, and carpets. I decided against allowing our tooth fairy to use her dust. As it is we already find glitter on each other more than we’d like. Usually it is okay with the girls, but I’m not sure how Brent feels about having glitter on the side of his face while he’s calculating someone’s mortgage.

Another tooth fairy tip came to me via Pinterest: spray a dollar bill with hairspray and then sprinkle with glitter. Uh, sorry US Department of the Treasury, I just had to deface money, it was my kid’s first tooth.

Ultimately, last night there was a bit of a scuffle between Mr. & Mrs. Tooth Fairy as we debated how much we would give Olivia for her first tooth. After seeing how many friends had given $5 for a first tooth, I though that we should probably start there. But then Mr. Tooth Fairy said that if we set a precedent for $5 then we might be held to that for every tooth after. She’s going to lose twenty when it is all said and done. Yeah, just how did you handle that on the second tooth $20 Tooth Fairy?

Mr. Tooth Fairy won out with his argument. He rationalized that Olivia, having never owned a dollar bill before, would never know the difference. So I consented. But since a regular old dollar bill wasn’t special enough for me, I went scrounging through boxes at ten-o’clock at night to find something else. I just knew I had a few half dollars or even a silver dollar lying around somewhere. When I came upon a gold $1 Sacagawea coin, it was settled.

Because I had thrown out my back, Brent, uh-hem, Mr. Tooth Fairy, was charged with the task of getting the tooth, which had been secured in a snack-sized Ziploc baggie under her pillow. But when he went to try the door, it was locked.

Earlier, Olivia had been concerned about waking up and spotting the tooth fairy before she made the switch. Her fear must have prompted her to lock her door. Either that or her sister, Georgia, was trying to thwart the tooth fairy’s efforts.

After picking the lock with a special lock-picker thingy that sits on top of the door ledge, Mr. Tooth Fairy went in to make the trade. But being that Olivia sleeps on the top bunk of a bunk bed it wasn’t exactly the easiest of extractions. Luckily, he was able to find the tooth and make the trade.

In the morning, Olivia was so excited to receive her gold coin and she proudly showed it off to the entire family. The first thing she said to me was, “When can we go to the toy-store to buy something?” Great, I’ve now got to find a way to explain economics and tell her that she may have to wait to lose a few more teeth first. Sigh…. 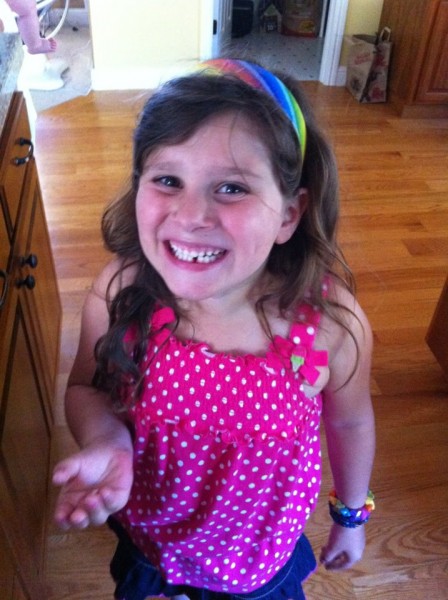