The other day my husband came home in a terrible mood. He was short tempered with me and it seemed like the kids had him going crazy. At one point, when I asked him to put a diaper in the trash, he chucked it across the room in the direction of the trashcan. I got pretty upset at his behavior and quite frankly, I got scared. I know that everything wasn’t yet running smoothly with a newborn in the house, but what I was witnessing in my husband that day had me thinking, “Oh, no. My husband is bailing out on me, how I am going to do this without his help?”

I took a few minutes to myself and went upstairs to call a friend. I left her a message voicing my concerns and fears and then sat down to do some writing. I thought about my fear of having to do this all alone and wondered how I was now going to parent four kids with a husband who didn’t want to help out anymore. I think Harper went out with the bathwater on that thought track. Exteme-thinking much?

After a few more minutes, what came to me was two-fold. One: I have never been left alone to do it all by myself before, why would I be left alone now? Because I saw my husband get a little out of sorts? Come on. Second: As I sat there, I began to think about what my husband must be going through with a fourth baby added to the scene.

Harper is three weeks old and things hit sort of a snag last weekend when we found out, just like her older sister Rocky, Harper is having trouble putting on weight. What this means is Mama (that’s me) has to do even more sitting on the couch and nursing than I was previously doing (which was a lot). I have to pump after each feeding. And per the lactation consultant’s advice, I then have to gingerly give Harper a bottle of the just-pumped-milk in between feedings to try and beef her back up to birth weight. The extra pumping and nursing means that I am even less available to tend to the other three children or our home. Plus, I also have more sleep deprivation than before because I must wake a sleepy baby every night to give her an additional feeding.

The implications on what this means to Daddy (that’s Brent) is that there is more demand on him to show up for the other three kids. Raquel at 22 months (almost 23 months) had decided to turn on her “twos” and has increased her verbal independence at the most inopportune time. Olivia and Georgia have never been the quiet kids who can play in the corner by themselves for hours. So it has been tough to keep everyone entertained. I read recently that when you have kids as close together as we do it becomes all about survival and less about enrichment (see my last blog on that topic). The article was pushing spacing children out more than we have, obviously.

Not only does Daddy work a busy day job, but also he is coming home to a wife who is tired. I also find myself battling guilt that the dishes are still in the sink and the laundry is still in the baskets in the hallway. The guilt is so silly because I know he understands that I am doing the best I can. But sometimes I can’t help feeling bad seeing him with all the kids and no downtime. After his long day he then has the task of helping with dinner, dishes, bath time, and bedtime, pretty much without any help from me.

It’s not an easy feat to be a new Daddy or Mommy. We have both been going to bed at 8 or sooner out of sheer exhaustion. We barely got through our favorite shows at night before falling asleep on the couch. I am grateful to the couple of friends who have cooked us meals so we at least get a little reprieve.

After I came back down that evening from my time-out and had my epiphany of compassion, Brent told me he was sorry for his freak-out and that he really wasn’t feeling well. He did end up getting sick a few days later and losing his voice. Although his apology was genuine, Note To Self: next time make sure that I turn off the baby monitor before leaving a message to my friend. He heard the whole thing! Doh!

I am so grateful that I have compassion today for my husband and that I give him credit for helping out so much.  I’m not sure if my own father ever changed a diaper. Things aren’t calm right now and they aren’t always graceful right now either. I have seen diapers thrown across the room, children sent to their rooms multiple times, and the bedtime routine started an hour earlier than usual. But somehow I know, despite how messy it might all go down, it goes down, gets done, and eventually we will get a groove back. 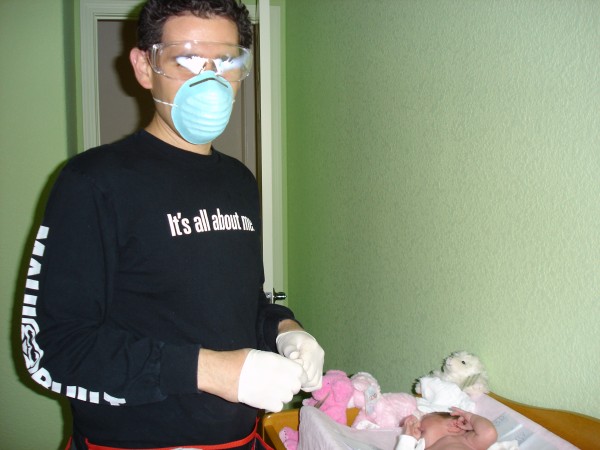