From my limited research, it isn’t 100 percent clear when or how the idea of a “push gift” came into being. Wikipedia sites the “push gift”, which is a gift, most notably jewelry, commemorating the birth of a child and honoring the mother’s nine months of hard work and ultimate delivery of said child, as going back somewhere into 1992.

The New York Times noted the uprising of “push gifts” or “baby baubles” starting in 2005 when it became more and more common for men to give a gift to the women who birthed their child. That year a Southeast-based jewelry company, Mayors, marketed diamond earrings with the tag line, “She delivered your first born; now give her twins”. Shortly thereafter some other jewelry companies started a push present registry.

These days it isn’t unusual to hear about the more extravagant push gifts given by the partners of celebrity mommas. Rachel Zoe, upon delivering her first child, Skylar, was given by her husband, Rodger, a 10-carat Neil Lane diamond ring, valued at $2.5 million dollars. Mariah Carey received a $12,000 necklace with the names of her new twins. And celebrity JLo was rumored to have received from then husband Marc Anthony, both a $300,000 canary diamond ring and a $2.5 million dollar set of earrings.

It seems as though the trend of getting something after the birth of a child may be popular in the celebrity world but may be a little less common or extravagant for the rest of us? Babycenter.com reported in 2007 that out 30,000 women surveyed, 38 percent of received a push gift, 55 percent of women wanted one, and 40 percent of both groups said the baby was ample reward.

Before my first child was born, I knew about the term “push gift” but I hadn’t read about it anywhere. One friend or another in perhaps a “peer pressure” type of way had handed it down through popular culture to us. When my husband presented me with a gift after Olivia was born I was very excited. It was a diamond necklace that he was very happy to have given me and I was even happier to have received. By the end of my second pregnancy with Georgia, I’m ashamed to admit, I almost expected something.

When Raquel was born, Brent broke out of the jewelry trend and instead worked with our photographer to create an album of the beautiful pictures she had taken of our family. The album contained photos and quotes, which he had selected, about love and family. He also personally framed several images in a large frame so I could hang them in the house. While I was very moved by his creativity and special gift, again I’ll be honest; I was surprised to not get my “usual” bauble.

Because we are leaning more towards saving as a family and less on spending, I will just say that this time around I was not expecting to receive anything after having our fourth and final daughter.  I guess you could say that by now it finally had sunk in that although lovely to receive gifts, I wanted nothing more than to hold my baby daughter. She would be gift enough.

My last blogged joked about feeling like I was going to be pregnant forever. In fact a few hours after I posted my blog, my labor began and by 6 pm I was at Petaluma Valley Hospital waiting for my doctor, or any OB doctor for that matter, to respond to the nurses requests to come help a woman (Me! Who was 9 cm dilated!) deliver a baby.

By 6:52 pm, an OB doctor was there (not mine), and little Harper Sloane Blaustein was born into this great big world. Her arrival came on the most sacred of days for my husband, who is a huge Rush fan (the band Rush has an album 2112). We were on cloud 9 and I was so happy to have her with me, I could think of nothing else.

I find it ironic that after all these babies and all this time, I finally found myself caring less and less about what nice thing Brent would give me after she was born and just be happy about having my family intact and complete. And while my loving husband did ultimately give me a special gift, he knew, that Harper was all I really wanted all along. 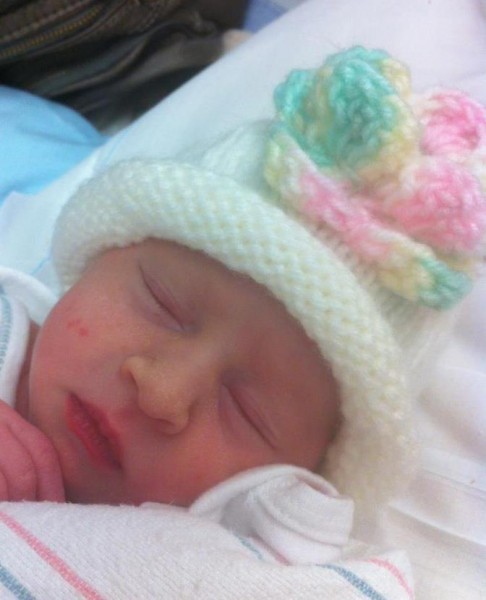