All of my children are girls and I am terrified. I am terrified because I know how mean girls can be. I lived a life of teasing as a young girl and even as an adult have had experiences, some recently, with women that I would have rather not have had. It terrifies me that my little sweet girls are one day going to be subject to the kind of cruelty in this world that some women treat other women with. I also fear that they could turn out to be the kind of girls that perpetuate the “mean girl” stereotypes in adolescent girls and women today.

Growing up overweight, I was teased a lot. But despite being overweight, I worked very hard to make those who were teasing me like me. I remember my first day at a new school in the sixth grade. I was teased a lot for being fat. Around Halloween, I dressed up in my mom’s homemade shark costume, which was actually quite elaborate and very cool. That day I was called, “Whale” by the other girls in my class. Even still, I worked very hard to make those girls like me. I invited the entire sixth grade class of girls to spend the night at my house for my birthday that year (God bless my mother).

Despite my weight, I accomplished what I set out to do, I made many friends, but I never could fully believe that people really liked me. I was painfully insecure (and still can be). I would sometimes overhear comments from other kids that would reinforce my belief that they really didn’t like me. I remember running the warm-up lap around the high school soccer field before a game and as I neared the stands I could hear a girl say something about my weight, then another girl came to my defense and said, “Shut up! She’s nice”.

As an adult I have had experiences with women whom I have attempted to make polite small talk with and they just literally roll their eyes at me, glance at the friend they were with, or walk away. I was at a store recently where I was returning some clothing and after I walked away I could hear the sales associate talking about my return. They were bummed that I had messed up their sales for the hour. But couldn’t they have at least waited until I left the store to talk about it?

Recently, I had a friend stop calling me out of the blue. I was surprised to not hear from her and after some time, I asked her about it only to hear that she decided to stop calling me because she said I was never the one to call her first. When I thought about it, I realized she was probably right (uh, even though I have three small kids) so I made a huge effort to reach out to her. But she still did not pick up the phone and call me anymore. My feelings were hurt but I eventually accepted that friendship might never again be what it once was. It felt a lot to me like I was back in high school trying so hard to make someone like me. Although, I will give her the benefit of the doubt since we are grown women, I decided that leaning into the friendships that feel good to me are worth more than chasing around someone who clearly wasn’t reciprocating anymore.

My oldest daughter, Olivia, is four, and lately as she plays with her dolls and toys I hear her saying things like, “I don’t like you, you’re not my friend” to the other dolls. When I pick her up from preschool, I sometimes hear her ask her friends before we leave if they are her friends. I cringe inside when I hear that. “Oh, no” I think “Is it starting already?” Lately she has also started doing this thing to me when she asks for something and I say “No”, she responds with, “then I’m not going to love you”. I tell her that isn’t nice to say or I say, “Well, that’s too bad, I will always love you”. Then she usually says, “Ok, I will love you”.

I realize that a lot of what I am experiencing with my little daughter is age appropriate behavior. But I also think that I am partly afraid because I do not want to relive any of my pain through them or see my girls suffer the cruelty of other girls in anyway.

I know that the onus is on me as a woman to be a healthy role model for my daughters of womanhood and to show love and tolerance for other women as much as possible. I aim to surround myself with loving and caring women who do not judge others or me. They strive to accept each other no matter what and trust that every woman in their life is doing the best they can with the tools they have to live their life with.

I still get scared meeting new people. I hosted my littlest daughter’s playgroup at our house for a holiday party a few months back and a couple came in bringing a bottle of wine. I fumbled with my words and said something like, “Oh, you didn’t have to do that. Should we open it now?” fumble…fumble…fumble. They just looked at me. I felt like a freak. But I think it was okay. Next time, I’m just going to say, “thank you so much for the wine, how generous” and then shut my mouth.

I dedicate this blog to the wonderful women in my life; my sister, Susan, my sisters-in-law, Eliza & Lauren, my mother, Marilyn, my mother-in-law, Tobi, my grandmother, Betty, my mentor, Susan, my friends who call me and support me know matter what (even when I put my foot in my mouth), the fabulous women of the PMC, Lisa, Marianne, and the many other community builders I have met since moving to Petaluma in 2004. I pray that my little girls don’t suffer the same horrors that exist in the world with bullying and teasing and that they don’t become bullies themselves. I hope that they continue to learn the difference between right and wrong and stand up for what they believe in coming to the defense of others when needed. To all the mothers out there raising young daughters, Sí se puede! Together, we don’t have to be afraid of the mean girls anymore. 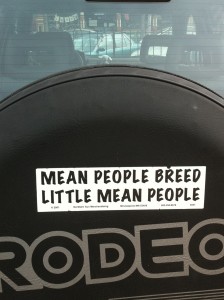